The Patrick Cutrone to Wolverhampton story, which started off as rather exciting last Friday, hasn’t quite taken off the way it should have.

Members of the Italian and English media were all over it when it first emerged, but a weekend has since passed without any further movement, and Monday’s offering wasn’t all that morale boosting either.

Tuesday’s, courtesy of Corriere dello Sport, is a bit more optimistic, even if it doesn’t quite rekindle the fire that was set off a few days ago.

The newspaper continue to explain that Milan need funds to sign Angel Correa from Atlético Madrid, and André Silva’s sale to Monaco, which appears to be all but done, will help greatly. 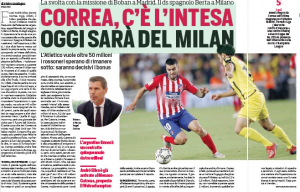 They still require a bit more, and that’s where Cutrone comes in.

The setback comes from the player himself, which we already knew, who isn’t all that keen about emigrating to England, especially to a club that isn’t ‘top level’.

However, the negotiations ‘are open’, especially since friend-of-Wolves Jorge Mendes apparently ‘promised’ an extra €25-30m for Paolo Maldini and Zvonimir Boban from the player’s sale.

Furthermore, in the young Italian’s case, every penny received would be a profit, since he was formed at the club.

There’s undoubtedly more to come from this, and we’ll bring it to you if we see anything over the next few days.