Barcelona must find a new club for Jean-Clair Todibo this summer as Schalke decided against making his loan stay permanent after the end of the last season.

The centre-back has been linked to clubs across Europe, including those from England.

Over the weekend, Sport reported Wolverhampton Wanderers were in ‘pole’ position to sign the 20-year-old. It was also explained the former Toulouse man’s profile ‘fits perfectly’ to the needs of the Premier League club.

Today’s edition of Sport analyses those Barca players who could leave Camp Nou this summer, and Todibo is among them.

The newspaper states the France U20 international has no place in Ronald Koeman’s squad, and the Catalan club want to sell him for €20m.

Barcelona are facing difficulties because Todibo was tested positive for the coronavirus when he returned to the club last month. He’s not yet recovered and has not joined his teammates for training.

It’s claimed the La Liga side have received offers from Germany, but provide no details of those clubs. 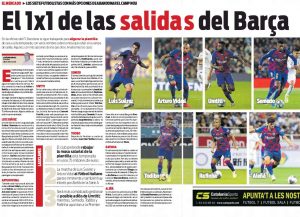 Wolves get a mention, and the report states that in ‘recent days’, the club who have shown ‘most interest’ is the player is Nuno Espírito Santo’s side.

Although Wolves have shown ‘most interest’, the report doesn’t provide any details of whether or not the English club are set to make an imminent offer for Todibo.

It could be they are just waiting for him to overcome the virus and test negative before making their move.