For months, the Catalan media have reported that Everton are interested in Barcelona’s Jean-Clair Todibo.

The Toffees were reportedly in talks with the La Liga side for weeks, while Leicester City have also asked about the centre-back.

Wolverhampton Wanderers have become the latest club to be linked with the 20-year-old.

According to Sport, Wolves are now in ‘pole’ position to sign the defender this summer.

He returned to Barca after his recent loan spell at Schalke and his hopes of being included in Ronald Koeman’s squad have been ‘extinguished’.

Barca view the France U20 international as a ‘clear asset’ to ‘make cash’, and the report states the player will leave the Camp Nou on a permanent transfer in the ongoing window.

That’s when Wolves get a mention. Nuno Espírito Santo’s side want to bet on young players with projection, and the former Toulouse man ‘fits perfectly’ to the needs of the Premier League club.

Barcelona are demanding a fee between €20 and 25m, and are aware Wolves funds, having recently received €17m from Matt Doherty’s sale to Tottenham Hotspur. 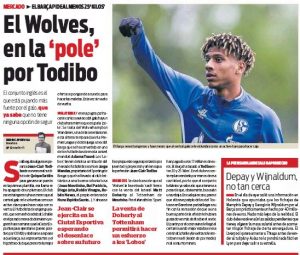 Wolves are likely to ask for a discount, but the Blaugrana don’t contemplate lowering the price tag.