Rafa Silva has long been linked with a move away from Benfica, with the attacking midfielder, who can play on the right, left or through the middle, repeatedly seeing teammates come and go and his chance not arriving.

There has been interest in various windows, but the opportunities presented weren’t exciting enough for the player to push for a move.

Turning 29-years-of-age in the next month, Silva must now know that it’s getting to the now-or-never stage for a big move, and that could help Wolves in an attempt for the player.

Wolves have been linked repeatedly, especially in recent months, and A Bola report their interest has been clear for a while. So much so, there’s been indications a ‘concrete proposal’ could soon arrive for the player. 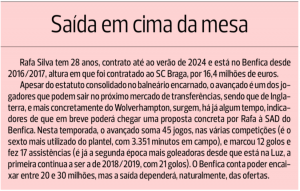 Rafa Silva has 12 goals and 18 assists for Benfica so far this season. His contract lasts until June 2024, and he’s represented by OnSoccer, so isn’t part of Jorge Mendes’ Gestifute group.

Wolves are said to be the ‘most concrete’ club in the mix for his signing.