Home Europe ‘There will be an offer’ – Manchester United ‘launch’ for impressive signing,...
SHARE

Barcelona are ‘fearful’ that Manchester United will ‘launch’ a big-money bid for Frenkie De Jong this summer.

That’s according to Sport, who say that United are ‘in the market’ for the midfielder as part of their rebuild under Erik ten Hag.

The newspaper explains that De Jong is a player who has always ‘aroused interest’ in the market, and while Barcelona are hoping to keep him, a million-dollar offer would change that stance completely.

Manchester United have made the Dutchman ‘one of their priority targets’ as they plan a major overhaul for their new manager this summer.

Ten Hag has ‘fully trusts’ the midfielder after making him the star of the show in his team a few years ago, a period that saw him ‘explode’ and eventually move to Barcelona.

The new United boss now has more than €250m to build a new team at Old Trafford, and ‘there will be an offer’ for the Dutchman as a result.

Barcelona do not want to sell, and everything indicates that the player does not want to leave at this moment in time. 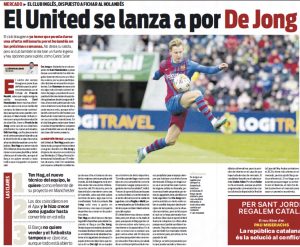 He’s enjoying himself more under Xavi than he did Ronald Koeman, and Barcelona know he will be one of the ‘key pieces’ of the new project under the Spaniard.

However, it’s felt that Ten Hag’s arrival at Manchester United ‘could change everything’ because he has a great relationship with De Jong and almost unlimited financial resources at his disposal to get him.

Manchester United are yet to make any sort of step towards a deal, but Barcelona have ‘heard sirens’ on the subject and are keeping their ears open for any advances.

They don’t want to sell but do need to make a big sale before June 30th, and losing a midfielder out of the squad is the most palatable option on that front.

It would still take a huge offer, around €75m, which Barcelona paid Ajax for De Jong, to make anything happen, but that is something United could offer quite easily given the war chest at Ten Hag’s disposal.