Erling Haaland’s entourage have insisted he has not yet ‘signed anything’ with Manchester City, despite reports to the contrary.

That’s according to AS, who say the Norwegian wants to ‘make the most’ of his chances to play for Real Madrid.

The newspaper have consulted sources ‘very close’ to the player and say the striker wants to leave the option of a move to Real Madrid open for as long as possible, so has not yet ‘committed himself’ to Manchester City.

Instead, his idea is to leave both options open, City and Real Madrid, until the end of the season to see what the situation is at that point.

It is his dream to play in white, but that could be blocked by Kylian Mbappe’s arrival from PSG; however, until that is confirmed, he will not make the move to Manchester City. 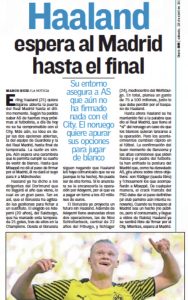 What is clear is that Haaland will leave Borussia Dortmund and has told club officials that he will not continue at the club next year. They have already moved quickly to sign a replacement in RB Salzburg’s Karim Adeyemi.

Dortmund are only publicly insisting this is not the case because doing so would push Adeyemi’s price tag above the €40m figure currently being quoted.

In the meantime, Haaland is in limbo, waiting for Mbappe to sign for Madrid, which would then close the door for him and leave him ‘free’ to finalise a deal with Manchester City.