According to the report, there’s a full agreement for the transfer, with the Eagles paying €17m for the Brazilian striker.

Now what Record also claims is that Carlos Vinícius could have ended up signing for Wolverhampton Wanderers this summer instead.

They say the player had ‘one foot’ at Molineux, since his transfer to the English side was ‘practically closed’.

Wolves were ready to pay €18m for the transfer, but the deal collapsed once they tried to get the player a work permit and it was denied. 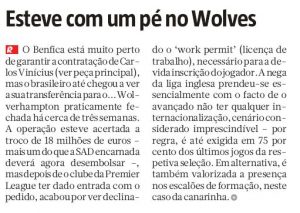 Record says that the big reason why Carlos Vinícius couldn’t get the visa is because he doesn’t have any appearances for the Brazilian national team.

The striker had two loans last season, one for Rio Ave and another one for Monaco. Now joining Benfica permanently, he’s set to sign a five-year deal with the Eagles.

Credit where it’s due, the Italian media had already reported Wolves’ talks for the striker, claiming the Premier League side would be offering up to €20m for him.