Home Europe West Ham transfer to be completed at ‘quite lower than €10m’, possible...
SHARE

Rennes are now waiting to complete the signing of Diafra Sakho, report L’Equipe in their Monday edition.

Sakho seems to have been on the verge of a West Ham exit for quite some time, with a move failing in the summer 2016 transfer window, and then several others going the same way since.

France Football reported a breakthrough in the Rennes transfer on Sunday, and now L’Equipe have a little more information to pad the story out.

It’s reiterated Sakho was so close to signing for Rennes in the summer that a medical had been completed on a €10m transfer, but everything fell to pieces when West Ham wouldn’t play ball. 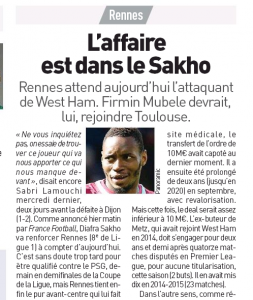 Now the transfer is set to be for ‘quite lower than €10m’ according to the French newspaper. That would suggest a disagreement with some of the other figures being passed around the media.

Sakho will be signing a two and a half year contract with Rennes, which may be shorter than the 28 year old would have preferred or may show he’s already got half an eye on moving again in the not too distant future.