AS Roma are trying to get rid of Maxime Gonalons, and there’s some optimism West Ham could be the destination.

With a year left on his Lyon contract, the midfielder joined the Italian club in July 2017. He then made 16 Serie A appearances for them, in and out of the team and suffering from a calf injury.

The following summer they loaned him to Sevilla, who have a reputation for gambling on loans.

It didn’t pay off this time, with the 30 year old suffering, in order, a fibula fracture, an ankle injury, and a tear to the adductor muscle.

He was sent back and now needs a new home. 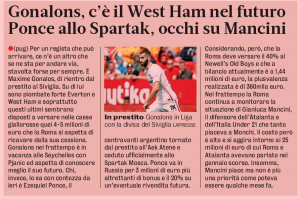 the player (let’s hope they haven’t injured him), and the former ‘seem willing’ to pay €4-5m for the Frenchman.

It would be a huge gamble for Manuel Pellegrini’s side, but if, and it’s a big if, they can get him consistently fit and consistently playing at his best level then it’d be worth it.