There seems to be something happening around Kalidou Koulibaly.

For a while in Italy the slant was Napoli were completely against a sale and if a club tried to force it then the price could even go above €150m.

The Italian club’s president Aurelio De Laurentiis would make signing the defender an absolute nightmare, so interested parties backed off.

Things have changed over the past week or so. Manchester City are being repeatedly linked, with claims for Juventus, PSG and Liverpool too.

And now the price is put at around €120m, as Tuttosport report today. They’re covering Pep Guardiola’s side being serious competition to Juventus.

It’s explained the Turin club believed they had an advantage because Maurizio Sarro worked with the player at Napoli.

However, a ‘monstrous offer’ from Manchester City has ‘swept away’ that plus for Juve.

To be clear, Tuttosport state: ‘And so the emotional factor that binds Sarri to Koulibaly would be swept away by the monstrous offer of the English club.’ 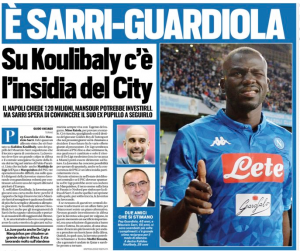 They don’t make it clear whether an offer has been made yet or is expected, or if they’re talking about a transfer fee or personal terms.

It all sounds very speculative, but the point to take away is that a Koulibaly transfer doesn’t seem as unlikely as it did a month or so ago.