Marlon Santos da Silva Barbosa, simply known as Marlon, initially joined Barcelona B on loan from Fluminense in summer of 2016. The same year, he made his debut for the Spanish champions’ first team, when Luis Enrique was in charge at the Camp Nou.

The 22-year-old joined Barcelona on a permanent deal last summer and after the club’s pre-season tour, Ernesto Valverde decided not to include the centre-back in his plans for the 2017/18 season.

Barcelona allowed Marlon to join OGC Nice on a two-year deal and an option to sign him on a permanent transfer in 2019. According to the Catalan newspaper Mundo Deportivo, the Brazilian’s form for the Ligue 1 outfit has seen him attract interest from several clubs from the Premier League, including West Ham and Leicester City.

West Ham have already contacted Barcelona and Nice to express their desire in signing the defender. Reports from England suggested that Leicester City are also looking at the option of signing the player, probably given Claude Puel’s Nice connection. 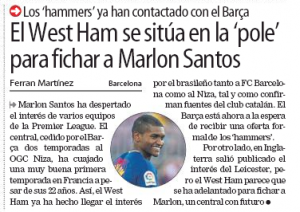 But Puel left Nice before Marlon arrived, which would put an odd angle on it.

Mundo Deportivo reports West Ham are in the pole position in signing Marlon. Barcelona are now waiting to receive a “formal offer” from Manuel Pellegrini’s side.