It seems West Ham still tried to land William Carvalho from Sporting CP in a late (and desperate) attempt on the deadline day.

As Portuguese newspaper Record reports today that the midfielder is staying at the Lisbon side, they say West Ham made only one more offer yesterday, and it was very different to the previous ones.

The Hammers would have asked for a loan deal with an option to buy. Carvalho would be signed now for €2m, and then make the permanent move in January 2018 for another €25m. 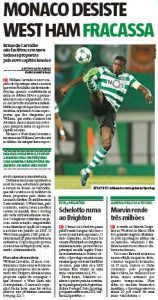 The West Ham bid was obviously turned down. As reported by the Portuguese press in the past few days, Sporting had been rejecting offers of over €35m, so there would be no sense in even making this attempt now.

Other newspapers such as A Bola report how frustrated the midfielder was after seeing the transfer collapsing.