There’s a bit of a disagreement in Portugal regarding how much Leicester City are paying for the transfer of Adrien Silva from Sporting.

The midfielder, who left the national team squad to sign for the Foxes last night, is still to be announced by the Premier League side, as the club needed some extra time to complete the transfer.

When Sporting announced the agreement with Leicester City this morning, they didn’t state how much they made with the sale, even though they do that in most cases.

That’s why there’s this margin for different information. Portuguese newspaper O Jogo, for example, claims the deal was done for only €17m. That’s only a couple of million more than they reported when the bid arrived, so maybe they’ve just mistaken the currency yesterday and it was something around £15m instead of €15m. 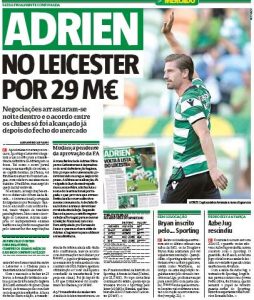 But newspaper Record, as you can see in the image, claim the deal includes a few bonuses which makes it reach up to €28m. The way they mention the whole amount makes it sound like the bonuses are really easy to reach, even though they don’t reveal what they are.

One way or another, Leicester City saved some money after failing to sign the player last summer. At the time, Leicester believed he would arrive on a €30m deal, but Sporting demanded payment of the €45m release clause.