West Ham are yet to pay Eintracht Frankfurt money owed for striker Sébastien Haller, and there is a growing feeling they will miss this month’s deadline on the next instalment.

Earlier this week we covered a report Frankfurter Rundschau claiming the Hammers had still not paid an instalment that was due in May.

The newspaper explained they had not paid the next chunk either, although it wasn’t made clear at the time if they meant the previously mentioned May payment or a new one.

Kicker, who originally reported on the situation back in July, cover the case today and give an idea of what’s going on behind the scenes.

The next payment in the transfer is due on August 15th, although the newspaper makes clear the exact amount isn’t known at this stage.

However, as West Ham have yet to put forward the money they owed in May, there is ‘considerable doubt’ at Eintracht they will do so for the next instalment.

The Bundesliga side have already complained to FIFA about all this, with a court hearing taking place behind closed doors on Tuesday.

The outcome of that hearing is yet to be revealed but ‘it is expected’ that FIFA will order West Ham to pay what they owe. 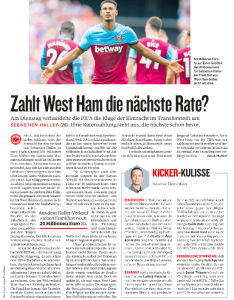 Whether the Hammers will actually do so, though, remains to be seen. Frankfurt don’t seem optimistic on that front, and so they’ve looked at different ways to solve the dispute.

One of them is to ‘sell the claim’, which seems to be Kicker hinting that the German club may sell the debt to a specific agency that deals in such matters and let them chase West Ham instead.

That, they explain, would at least ‘draw a line’ under the case and let them move on.

If they don’t do that, there’s a fear the legal disputes could drag on for a considerable period of time.

It is made clear, though, that if FIFA order West Ham to pay and they refuse to do so, they could end up facing a transfer ban, which you assume is something they’ll desperately want to avoid.