Manchester City goalkeeper Claudio Bravo is close to completing a move to Real Betis after being heavily linked to the Spanish side this week.

That’s according to Chilean newspaper La Cuarta, who say the goalkeeper has reached an agreement with Manuel Pellegrini’s side.

Reports this week indicated that Betis had identified Bravo as a target this summer as they look to add a goalkeeper to the squad.

A report yesterday stated that talks with his agent were ‘well underway’ and Betis were ‘optimistic’ a deal could be reached for him to move once his contract with Manchester City expires.

La Cuarta back that up today, saying that the Chilean goalkeeper has held ‘intense conversations’ with Betis over the last few days and now ‘reached an agreement’ on at least a one year deal. 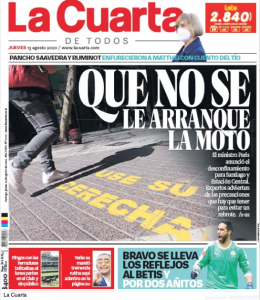 This has been confirmed to the newspaper by a source close to Betis, who told them “we trust that the Chilean goalkeeper will soon sign with us.”

“That would be enough to make it official. Only a few small details remain, and we hope to settle them very soon.”

The exact time he will sign with the club isn’t mentioned, but it is stated that Betis are confident Bravo will ‘finally sign at the end of this month’.

That is likely to be when Manchester City have finished their Champions League campaign, with them taking on Lyon in the quarter-finals on Saturday. 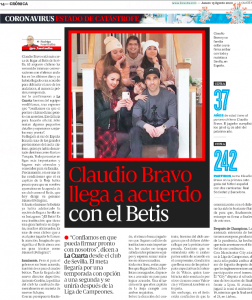 If they win that, the semi-final will take place on the 19th of this month, with the final set for the 23rd.

Bravo, then, could be free as early as next week, although it will depend on how City get on in the competition first.

Either way, there is now a growing confidence that he will be going to Betis for at least next season, with an agreement in place for that to be extended if the two parties ‘agree on the compromise’.