Of all the players to impress under Manuel Pellegrini at West Ham last season, Idrissa Diop stood out brightest.

The young centre back arrived at the London Stadium in a £22m move from Toulouse last summer as Pellegrini looked to significantly bolster the heart of the Hammers defence.

It was a job he succeeded in with Diop, the 22-year-old quickly becoming a key player under the Chilean, making 38 appearances in all competitions.

His performances certainly caught the eye, with many believing the Frenchman is one to keep an eye on in the years to come.

Indeed, before Manchester United completed a big-money move for Harry Maguire, there were plenty of suggestions that Diop was a player they were looking at.

Most are predicting him to make a big move from West Ham in future, but he insists he’s not at the club to use them as a springboard.

“Whether technical, tactical, physical, I still have a large margin of progression,” he told France Football.

“It is the performance that I will make in the match that will determine if I have the level to play with Les Bleus (France). It’s up to me to work. That’s how I see things.

“All very good players go into the national team. Well, if I am very good, it will come if it should come. Obviously it’s a goal, but the proof that I deserve to reach it, it’s me who must give it.

“West Ham, for me, it was not and is still not a springboard to go elsewhere, it’s the club where I want to try to become the best defender I can be, compared to my qualities.”

This is precisely the kind of talk that West Ham fans will want to hear. 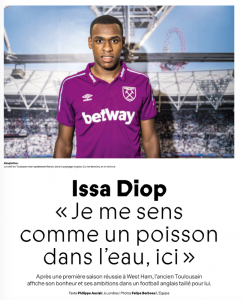 improve himself, and not get a more significant move, is the kind of attitude fans and managers want from their players.

That’s often not the case, and the Hammers have been stung in that regard in recent years, so hearing a player saying the opposite will be a refreshing and pleasant change of tone.