Manchester United are busy rebuilding their squad this summer and there’s a real focus on signing young players once again.

Ole Gunnar Solskjaer intends to rebuild United on youth prospects, with the club already signing Daniel James and Aaron Wan Bissaka as a result of that mentality.

Centre back is a priority position for the club but so far United’s attempts to sign Harry Maguire and Issa Diop have proven to be fruitless.

It seems they’ve now turned their attention to France and Monaco in particular. L’Equipe report that they have joined Wolves in showing an interest in the young centre back Benoît Badiashile this summer.

In fact, according to the newspaper, United have been tracking his progress for several years and this summer could be the one in which they make their move.

Monaco boss Leonardo Jardim has admitted privately that he can’t guarantee the youngster playing time and as a result, Monaco may be open to a sale. 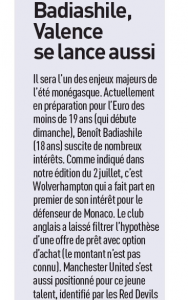 L’Equipe believes the asking price would be around €35m. They also say that Valencia are keen, while Wolves have pushed for a loan deal with a purchase price at the end.

Manchester United, who have ‘positioned’ themselves, will have to push forward quickly if Badiashile is someone they want. It’s a move that would make sense as well.

€35m is more than affordable and is far cheaper than what they’d have to pay for either Maguire or Diop. Badiashile is inexperienced, though, given he’s only made 36 appearances in his career to date and that’s risky if United are looking at him as a first-team option moving forward.