Home Europe West Ham have ‘asked for a price’ for player, could move ‘at...
SHARE

Whilst it’s still questionable whether West Ham’s interest is genuine or just a tool to pressure Real Betis into paying up, the links with Borja Iglesias continue on Sunday.

On Saturday there was a Spanish consensus that the Hammers had come into the transfer picture late, just as they did with Maxi Gomez.

Betis have been trying to sign the striker from Espanyol, and whilst they’re willing to pay his full €28m release clause, they want to do so in instalments. Things have been somewhat stalled, with no agreement on what gets paid when.

Sunday’s edition of Sport, says West Ham have ‘asked for a price’ for the player, which seems a little odd given they’d know the price: That €28m.

Sport go on to say: ‘They say that when the river sounds, it’s water. And in the last hours the news of a presumed interest of the West Ham United in the services of Borja Iglesias has burst with force. The refusal of Maxi Gomez to stop at the club of East London seems to have activated the ‘Plan B’ in the club of the Premier League.’ 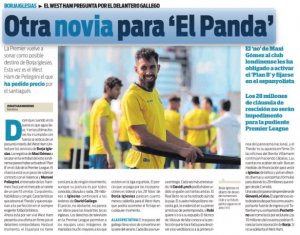 Of course, they reiterate that the price is the clause amount, and it’s explained that because of all the lovely Premier League money the €28m wouldn’t be an issue for West Ham.

The club could move ‘at any time’ to sign the player.