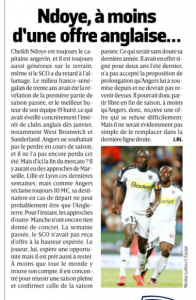 Angers skipper Cheikh N’Doye is facing an uncertain future at the Ligue 1 club with just one year left on his contract.

The 30-year-old signed a two-year contract last summer, and has refused to sign a contract extension.

The Senegalese midfielder was linked with a move to West Bromwich and Sunderland in January, but Angers were reportedly reluctant to lose him mid-season.

In fact, they’ve managed to keep him so far this summer, but the player could be moving in the final few days of the transfer window.

Marseille, Lille and Lyon have made approaches in the recent weeks, reports L’Equipe on Thursday.

The Ligue 1 club want €10m for the midfielder, and L’Equipe believe he could still be heading to England.

However, Angers haven’t received any concrete proposals which match their valuation of the player.

It’s be interesting to see if West Bromwich Albion or Sunderland rekindle their interest in N’Doye in the final days of the transfer window.

Championship club Aston Villa were also linked in January, and just over a week ago it was reported in France that Villa had approached the player.