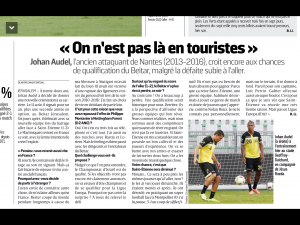 Martinique international Johan Audel has told the French media Nottingham Forest were interested in signing him this summer. The attacker recently joined Beitar Jerusalem from Ligue 1 side Nantes despite the chance to head to England.

Speaking to L’Equipe, Audel was asked why he’s rejected a move to Nottingham Forest, and instead took the decision to play in Israel.

The 32-year-old confirmed Nottingham Forest manager Philippe Montanier tried to convince him to sign for the Championship club, and rang him three times with regards to a possible move. Audel said there were also French clubs showing an interest, but he felt a move to Beitar Jerusalem felt right.

“Yes. He has been on the phone three times to me, and that’s it. I also had contact with Bastia and Lorient. But the feeling was right with the leaders and the Beitar coach,” said the player with regards to Nottingham Forest’s interest.

Audel came through the Nice youth system, and has played for a number of clubs in France, including Lille, Lorient and Valenciennes. The forward also had a brief spell with German side Stuttgart.