Home Europe Watford looking to renew player’s contract and sell him in the summer,...
SHARE

Although some recent stories from the Italian press have seemed confident that Torino can land Roberto Pereyra from Watford, newspaper Tuttosport shows up today to calm things down.

In a big story about the club’s plans for the January window, they explain that landing Pereyra shouldn’t be easy.

Tuttosport claims that Watford have rejected the approaches for the player, and are actually planning to give him a contract extension, since his current deal expires in 2021.

The newspaper says that this extension would be made for the club to feel more comfortable when negotiating the player’s exit in the summer. 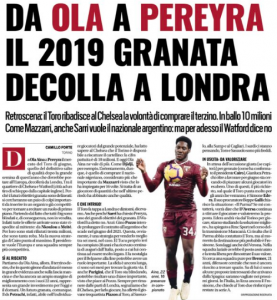 It’s even mentioned that the Chelsea boss Maurizio Sarri has requested the midfielder, although there are no other details about this.

Tuttosport only expects Pereyra to leave in the summer, so there’s still a long way until this story gets hotter. It’s claimed that the player has received ‘hundreds’ of approaches from Italy already.