One of the more sellable assets in Rennes’ team, Ismaila Sarr could be on the exit path this summer as long as the Ligue 1 club get a certain amount.

According to France Football on Tuesday, that fee is said to be around €35m, which interested clubs, including Watford, have yet to meet.

The magazine claim the Hornets are the only side to have made a move for the Senegalese forward this summer so far, but their bid was deemed insufficient.

As well as Watford, two unnamed Spanish sides, both playing in Europe next season, have cast their eye on the 21-year-old, who ended the season on eight goals and seven assists in 35 league appearances. 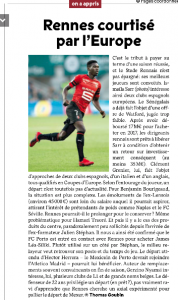 Originally bought from Metz for €17m, Rennes are looking to double their money on their starlet, who also had a very successful Europa League campaign, finding the back of the net four times in nine games.

As for Watford, they now know how much they need to pay to acquire Sarr’s services, and until they get close to that figure, it seems unlikely anything will happen.

‘Atmosphere’ between Everton and player now ‘totally broken’ – Would have...

“We need to be more creative” – Watford director gives hints...