With Vincent Kompany freeing up a space in the pecking order at centre-back, a disgruntled Nicolas Otamendi may have managed to feel a bit better about his situation at Manchester City.

However, the Argentine defender is still attracting some interest because of his backup role to John Stones and Aymeric Laporte under Pep Guardiola.

According to Marca on their liveblog, Paris Saint-Germain have entered the fray, knowing they might need to add some experience to their backline, especially with Thiago Silva entering the final years of his career.

Marquinhos has also been used a few times at defensive midfield by Thomas Tuchel with rather positive results, so some depth at the role wouldn’t go amiss. 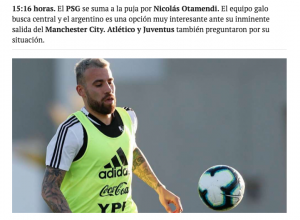 The Spanish newspaper go as far as saying that Otamendi’s exit from the Etihad is ‘imminent’, although his destination hasn’t been sorted.

As well as Paris Saint-Germain, Atlético Madrid (who are losing Diego Godin) and Juventus (whose backline is ageing) have also ‘asked about his situation’.

We might have a different definition for the word ‘imminent’ than Marca, so this might not get resolved just yet, but the Spaniards seem rather convinced Otamendi is on his way out.

The option of a move to France had been rumbling along quietly in Argentina over the past couple of months without anything serious being reported.

Marcel Brands ‘likes other profiles’ – Sounds like agent has offered...