Midfielder Renato Sanches has claimed he was ‘‘forced’’ to go to Swansea in an ill-fated loan move from Bayern Munich.

Sanches, who was at Bayern Munich at the time, joined Swansea in a season-long loan deal in 2017 in one of the surprise signings of the summer.

The capture of the highly-rated youngster was seen as a significant coup for the Swans, with many predicting him to be a star at the Liberty Stadium.

Things did not go quite to plan, though, with Sanches making just 15 appearances in all competitions and less than 1000 minutes of football during his time in Wales.

The move proved to be a costly one for all involved as Swansea were relegated that year and Sanches failed to rediscover neither his form nor his confidence.

He’s now rebuilding his career at Lille and admits, had the choice been his, he would not have made the Ill-fated switch to Swansea.

“It was not my choice to go to Swansea. I was forced to go there,” he told L’Equipe.

“I didn’t want to go. I have respect for the club, the players, all the people I met there. I appreciated their humility. 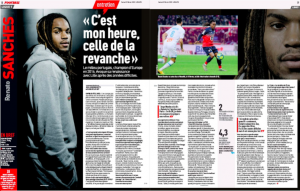 “They gave me everything, but I did not want to be there. The most difficult moment? When I was injured, I couldn’t train.

“It was the descent; you can’t feel the motivation anymore. At the time, I no longer felt this strength.”