Home Europe Club have Manchester United man ‘in their sights’ – Are ‘ahead of...
SHARE

Juventus are at the front of the queue for Manchester United’s Paul Pogba and are hoping they can reach an agreement worth €100m for the Frenchman.

Pogba looks destined to leave Old Trafford this summer after a turbulent four years following his £94m move from Juve in 2016.

The midfielder was supposed to be the man to lead United into a glorious new era but has instead endured a difficult second spell in Manchester.

This year he has managed just eight appearances and 610 minutes of football in total, and, like last season, speculation is mounting that a move away will happen in the summer.

That is something Juventus are trying to turn into a reality, according to Tuttosport, having had Pogba ‘in their sights’ for some time.

The newspaper explains that Juventus are keen to take Pogba back from Manchester United and are working towards that goal.

However, at the moment, they are ‘hiding in the thickest silence’ and do not want to ‘expose themselves’.

Of Pogba’s numerous suitors, it is his former club are ‘closest’ to him although it is unlikely they will be the only runners in the race for his signature.

At the moment they are ‘ahead of everyone’, and Tuttosport say there are ‘many reasons’ why this is the case.

The most obvious is the fact that Pogba played, and enjoyed the best period of his career, at Juventus between 2012 and 2016.

In Turin he ‘made a massacre of hearts’ and that is something that his teammates/friends have not forgotten. 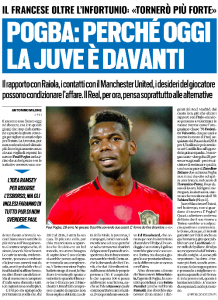 A shift in Manchester United’s stance has also opened the door for a move. Last summer they were demanding €150m for Pogba but have now reduced that to €120m, and it is ‘hoped’ that they can be persuaded to do a deal at €100m.

This could include Aaron Ramsey, with it stated that the idea of the Welshman being part of the deal ‘teases’ Ed Woodward.

There is also the fact that Mino Raiola, Pogba’s agent, has ‘daily contacts’ with Juventus chief Fabio Paratici and Real Madrid, who’s interest is dwindling after the emergence of Fede Valverde.

All of these factors are adding to Juventus’ belief they can finally bring Pogba back, with it looking like the Manchester United man will be one of the major players in the transfer window once again.