‘War in Manchester for Bruno’ is the headline used by Portuguese newspaper A Bola to report the battle between Man City and Man United for the Sporting midfielder.

To start covering this story, we must recall A Bola’s article from Wednesday first.

The outlet said Manchester City and PSG were leading the race for the player, and Manchester United, who had been linked to Fernandes for months, didn’t even get a mention.

Now it turns out the Red Devils are back in the race, even though A Bola’s biggest focus continues to be on the latest moves made by Pep Guardiola’s side.

The newspaper reports today that Txiki Begiristain has invited the Sporting director Hugo Viana to meet in Manchester next week. The subject will be the demands for the transfer of Bruno Fernandes.

A Bola claims that Manchester City want to make their interest ‘formal’, and by doing this, they would be ‘following the attitude from their rivals, United’.

So for the Manchester United fans who got a little desperate yesterday, A Bola are back saying the Red Devils are well positioned in the race. It just looks like they haven’t been making moves lately. 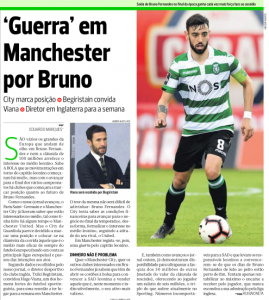 Manchester City’s intention would be to know the conditions for a deal now and then only make a bid at the end of the season. So perhaps that’s what Manchester United are also waiting for, and that’s why things have gone silent for the past week.

A Bola writes that ‘money is not a problem’ for the Etihad side, who are able to pay over €50m for Fernandes, and triple his salary to €6m per season.

Meanwhile, Sporting know they can’t fight these numbers, and now try to get as much money as possible for the player.