Manchester City and Paris Saint Germain are now said to be leading the race for Sporting midfielder Bruno Fernandes.

That’s what Portuguese newspaper A Bola says today, although neither of the sides have opened official talks with the Lions.

The outlet claims that both City and PSG have been pretty impressed when scouting the midfielder, and have made many approaches to know the conditions of a deal.

They’ve heard that Sporting are using his €100m release clause as a reference, but neither of them want to pay that much, and will start the negotiations from €50m. 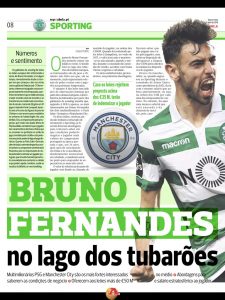 In Manchester City’s case, A Bola says that the scouting job is being done under the orders of Pep Guardiola, and the club consider that Fernandes has the right technical and physical skills to join them.

Sporting are trying to renew Fernandes’ contract, but with the player’s staff postponing the meetings for the summer, it’s unlikely that they will be able to give him a new deal.

Besides being attractive destinations, Manchester City and PSG can both triple the player’s salary, as they can afford to pay him €6m per season.

But as A Bola says, we must wait for the first official bids for the player, who has 28 goals and 15 assists this season.