So far, the midfielder has been restricted to five minutes of action in the Premier League with the Eagles this season.

Diario de Sevilla reported on Wednesday the Spaniard will return to Betis this month and it was also suggested Norwich City and Cardiff are interested in signing him. Later that day, ABC explained Alavés  have joined the race for the 25-year-old.

Today’s edition of Mundo Deportivo explains the player is one of the options proposed to Alavés in the winter market.

The belief is that Camarasa may not find it difficult to adapt at Alavés because he spent the 2016/17 season on loan with them.

Another newspaper, AS, explains Camarasa ‘may be appealing’ for Alavés, who are in the market looking for a new midfielder. Their idea will be is to sign him on loan until the end of the season. 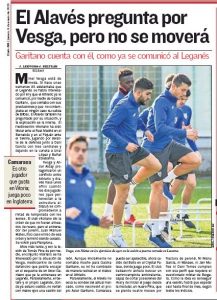 Mundo adds ‘we will have to wait until the end of the month, according to all the indications’.

The common theme from multiple reports is that Camarasa’s time at Palace is likely to end in January and he will have to find another club in the same window.