When the Gedson Fernandes rumours started it was pretty obvious that should the drama last more than a week, which it has, he would be linked to Wolves and/or AS Monaco.

These are the laws of Portuguese transfer dramas, we don’t make them.

And sure enough, we have Nuno Espirito Santo’s side dragged in today by Record. That doesn’t mean it’s nailed on nonsense… if you were an agent trying to sell a Liga Nos player then you’d contact Wolves wouldn’t you?!

And Gedson reportedly has several agents trying to sell him, including every Wolves fans’ favourite uncle, Jorge.

Record state Wolves have made a first ‘formal offer’ for the player. Nuno’s side are presented as ‘trying to secure his signing’, but the offer has been declined… Benfica want €40m.

However, the Lisbon club’s president  Luís Filipe Vieira is quite keen on the Wolves’ idea, as they’re said to be offering immediate cash, rather than a loan with a purchase obligation.

It’s also stated the Midlands club have ‘promised’ to return with ‘improve numbers’.

That said, it’s suggested a loan to Wolves, with a purchase obligation based on various player objectives, could be the way forward.

The Molineux club were reported to have made a €35m offer in the summer (something we covered right here), and that’s referenced again. Since then, ‘the context has changed’, with Benfica managers giving Gedson much less time on the pitch.

How that has seen his value sky-rocket isn’t explained.

Everton and West Ham interest is mentioned, but there’s nothing on Chelsea, who Sky Sports said yesterday had made a loan offer with a €65m buying obligation linked to the 20 year old playing at least 50% of the Blues matches during the temporary 18 month period. 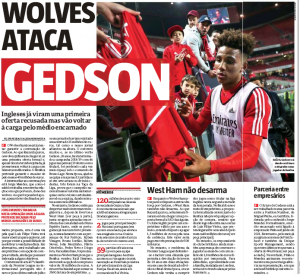 Gedson Fernandes’ situation is something of a rumour mess right now, largely thanks to which agents are being linked. Whilst Jorge Mendes trying a Wolves sale would be natural, he’s not the only representative claimed to be in the picture.

Pini Zahavi has also been linked (which can perhaps account for the Chelsea claims), and the youngster’s long term representative has been Miguel Pinho, the man who famously failed to sell Bruno Fernandes in the summer after the Sporting star broke all kinds of goalscoring records from midfield.