The front page of today’s edition of Mundo Deportivo claims Paris Saint-Germain and AS Monaco want to sign Ivan Rakitic and they intend to secure the Barcelona midfielder’s services.

The two Ligue 1 clubs have made ‘significant economic offers’ for the Barcelona midfielder, who has a release clause of €125m, which is an affordable price in the present market.

Ernesto Valverde’s side are worried about PSG’s interest in their player, especially after they turned their attention towards the Croatian after being left frustrated in their attempts to sign N’Golo Kate from Chelsea.

The French champions have the financial muscle to pay the Blaugrana star’s release clause, while Leonardo Jardim’s side have the funds available at their disposal to complete the operation, having sold several of their players.

Earlier reports from Mundo even talked about offering the former Sevilla man and/or Ousmane Dembele to Manchester United as a part of the deal to sign Paul Pogba. 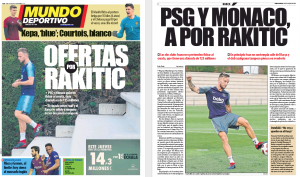 The player and the La Liga winners have no plans to part ways, which could make the whole operation to take Rakitic away from Camp Nou even more difficult.

If either PSG or Monaco are serious about their interest in signing Rakitic, Mundo claims this could result in a ‘new headache’ for Barcelona’s leaders of the club as they don’t even consider the option of selling the midfielder.