Despite adding the Chilean to the squad, Sport claims the La Liga winners have not closed the door of signing Manchester United’s Paul Pogba because of the midfielder, or at least his agent, wanting a move.

Ernesto Valverde’s side have been in contact with Mino Raiola and are also waiting for the Red Devils to quote the final price of the operation. Considering the time and the finances needed for the deal to take shape, it is ‘very, very difficult’ for the Camp Nout outfit to complete the transfer.

Barcelona and Juventus are both interested in Pogba and Raiola’s mission is to convince Jose Mourinho’s side to open the door for negotiations so that a transfer could be possible for a reasonable price.

Sport’s front page calls the transfer ‘almost impossible’, the inside article gets the same headline, and online they state the chances of the move are ‘0.01%’.

Monday’s edition of Mundo Deportivo reported Barcelona and Juve were ready to offer their players as a part of the deal to sign Pogba. Calciomercato reported there is an agreement between the player and Barcelona, which has now been denied by today’s edition of the Catalan newspaper.

But that hasn’t stopped Raiola trying to force a move away from Old Trafford for his client, according to the claims. It’s further stated Pogba’s relationship with Mourinho is strained, which has been mentioned several times, but even if he wants to leave United, they will not allow him to go for cheap.

It’s explained Pogba wants to enjoy his football and not face each working day with a manager who likes conflict. 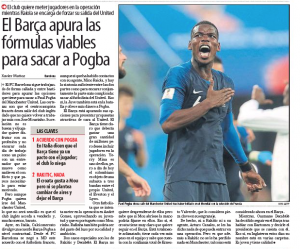 Mundo even talks about offering Ivan Rakitic and/or Ousmane Dembele, the Spanish champions have no plans to part ways with either but it’s suggested they could be a way to tempt Mourinho.

It is for anyone to guess that Manchester United will resist any offers for Pogba, especially with the window closing on Thursday and the club yet to fulfil Mourinho’s transfer demands.

The Catalan claims are contradictory in parts and Barca’s local media clearly doesn’t feel this is a goer right now. It could change and maybe tomorrow Pogba will get the full front page, Photoshopped-in-Barca-shirt, treatment.

Over at Marca they say that whilst Pogba wants to leave, he’s been told it’s not happening. The Frenchman isn’t prepared to go to war and force a transfer.