Mundo Deportivo claims Barcelona were thinking of closing Yerry Mina’s sale on Wednesday, but that didn’t happen because the Colombian international decided to save his decision for Thursday.

It’s believed that on Wednesday the former Palmeiras man came close to becoming an Everton player. However, both the defender and his agent decided to wait until today to see if Manchester United will make a last proposal for his services. 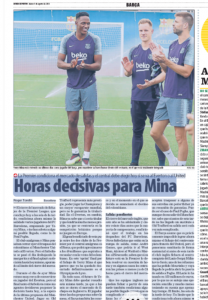 Mina has two proposals on the table and Ernesto Valverde’s side are aware of it.

The situation can only benefit Barcelona with their aim to get a fee closer to €40m for their player. Lyon were believed to be interested in the player, but it now looks like Mina will play in England next season.

He will have until this afternoon to make a decision and Mundo’s report doesn’t indicate whether he will join Everton or United.

Mina has to make a decision and we will find out about the final outcome in less than 12 hours as the transfer window in England will close today.