Loaned from Southampton for the season, there had been big hopes attached to the Dutchman, and he’s simply not impressed enough.

It’s not quite as bad as his experience at Club Brugge, but two consecutive such loans won’t help Southampton when it comes to selling the player in the summer.

Clasie had a temper tantrum last week when brought off the pitch, and was subsequently warned about his behaviour and fined by Feyenoord.

Given his history with 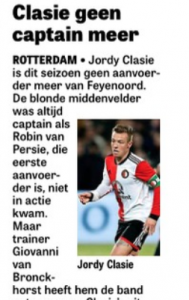 the club, the midfielder has been second captain, filling in on the occasions Robin van Persie needs a break, and his manager has now ended that.

Quoted by De Telegraaf, Giovanni van Bronckhorst said: “It was an action that is not worthy of a captain. That is why he is no longer a second leader.”

Over in Italy, there’s more bad news for a Southampton player.

Gazzetta dello Sport once again state there’s no chance Inter Milan will be keeping Cedric Soares beyond the end of the season. 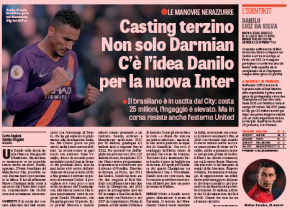 The fullback, and perhaps the Saints, was convinced he had a chance at a longer stay with Inter, but it seems they never intended to keep him after the loan.

Southampton convincing both these clubs to sign the loan players looks near impossible, and now a new plan will be needed.