A few days later, Los Blancos manager Zinedine Zidane admitted he likes the World Cup winner and the 26-year-old could join him at the Spanish capital club, if he decides to end his time at Old Trafford.

Marca didn’t get seriously involved in the transfer saga linking the France international with a move to Santiago Bernabeu until March 30th, when they reported two telephone calls have taken place between the La Liga giants and the midfielder’s agent Mino Raiola.

A few days later, Marca’s Jose Felix Diaz came up with another report, which hardly provided insight on any new development around the former Juventus star’s future.

Pogba makes it to the front page of today’s edition of Marca as it reads ‘Pogba The leader who Zidane seeks’ as his personality, both on and off the pitch, is key to the Real Madrid manager.

Marca talks about the dressing room video released by the French Federation earlier this year, where Pogba is talking to his teammates before taking to the pitch against Croatia in the 2018 World Cup final.

Within the story it’s once again mentioned Zidane believes his compatriot’s overall personality can be key inside the dressing room and he can become an all-rounder for the European giants.

The newspaper goes back to Zidane’s comments on Pogba in March and explains the former midfielder likes the Red Devils star’s leadership skills, along with his playing style. 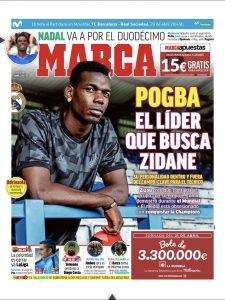 Zidane is not short of leaders in the squad, but still wants to add Pogba because the coach believes the player would fit the group at Real Madrid.

The manager is looking for hungry players and Pogba still has it, despite being crowned as world champion with his national team.

There’s one part of Marca’s report which will bring positive news for Manchester United fans, at least those who want to see the Frenchman play for their club next season.

Marca claims “It is in the club where they have more doubts, for his personality and, above all, his salary. The biggest obstacle will be Manchester United, who plans to return to winning titles with a project around the Frenchman.”

If we are allowed to have our take, today’s report from Marca gives an insight on reasons why Zidane wants Pogba and it’s an elaboration of the comments made by the Real Madrid boss on the player last month. 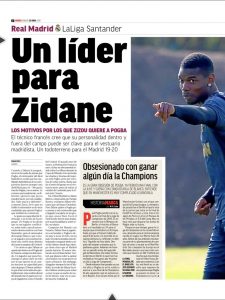 It shows Zidane is convinced the Old Trafford outfit’s record signing will be the right fit for Real Madrid, but his bosses above him still have doubts for various reasons.

Interestingly, Marca’s report does not provide information on whether there have been any talks between Raiola and Real Madrid, and there’s no mention of figures for salary and transfer fee.

It feels like a regurgitation, and not really worthy of the big front page status.