Fans can often feel that some transfer rumours are plucked from thin air, without even being born from a leak.

Sometimes it’s clear that’s not case, and that is the situation with Vitinha and the Portuguese media on Tuesday, and the story very much involves Manchester United.

First of all, let us introduce you to Vítor Machado Ferreira, widely known as Vitinha. The 22-year-old is a midfielder who plays for FC Porto, not to be confused with the other 22-year-old called Vitinha who plays as a striker for SC Braga.

He came through the Porto youth system, before being loaned to Wolves for the 2020/21 season. Despite playing 23 matches for Wolves, many of the appearances were brief and the club didn’t use their €20m option to make the move permanent.

Vitinha returned to Porto and very quickly worked his way into the team, becoming a regular as the club won the Portuguese double. Playing mainly as a central midfielder, he had a handful of games as a defensive midfielder. 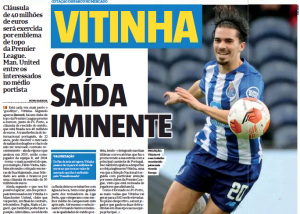 Impressing many back in Portugal, there’s been talk about his future, yet Tuesday’s claims about Manchester United take everything to a new level.

We’ll start with Record, who recently broke the story of Liverpool’s offer for Darwin Nunez. They say the player is heading for an ‘imminent’ exit. His €40m buyout clause ‘will be exercised’ by a Premier League club, with Manchester United the only one named.

Record say Erik ten Hag’s side are one of the ‘most interested’ in the player, and he fits the style of the Dutch manager. ‘Goodbye’ is getting ‘closer and closer’. 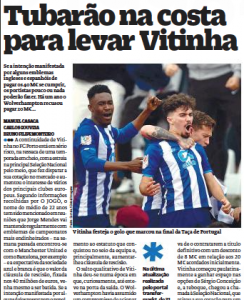 Over to O Jogo, who state: ‘The 22-year-old midfielder’s name has been mentioned in meetings that Jorge Mendes regularly holds with the most wealthy leagues – last week he met with Manchester United and Barcelona, ​​for example.’

O Jogo also say Wolves didn’t use their option because finances were hit by the pandemic.

A Bola report that Porto need to bring some money in, and, similar to Record, they say a Premier League club wants Vitinha and will pay his €40m clause. That club is in the top six, and Manchester United are the only side named.

So, we have three Portuguese newspapers all reporting on the same day that an English club wants Vitinha and would pay his clause. All three newspapers mention only one Premier League possibility… Manchester United. 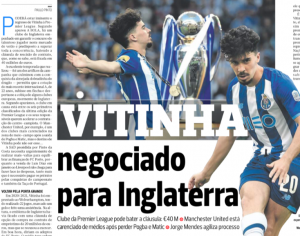 Yet it has to be made clear that none of them specifically say the Red Devils are absolutely the club who will swoop for the signing, it feels like they just want to leave readers with that impression. The hints are huge, without the claim being explicit.

Where has this all come from? Well, it’s clear someone has given this story to all three newspapers for publication today. In theory, that could be Porto themselves or the player’s agency, Jorge Mendes’ Gestifute.

Porto need some money, and Vitinha appearing in Portugal’s last two international matches helps hype his profile. This rumour will do the same… as whoever pushed it out there knows.

The coming days will make it clearer whether Manchester United are truly about to pay €40m for the midfielder, or if this is all part of some wider net casting.