The star of Metz’s attack last year, Habib Diallo hasn’t been able to replicate that form so far this season, as his three appearances for the club have yet to produce a goal.

In fact, he was left on the bench for the fourth game of the campaign against Stade de Reims.

That’s because he’s looked as being set to leave for quite some time now, and with Tottenham looking for a striker, the Senegal international is one of the names being linked with a move to Spurs.

L’Equipe, in their match report for Metz’s win over Reims, explain Diallo is ‘on the move’, adding the North London club ‘remains his priority’. 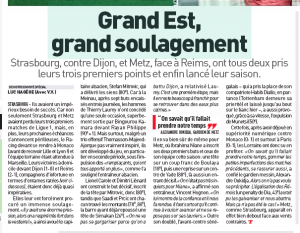 Whether that means he’s been approached by Tottenham and that’s what he’s holding out for isn’t explained, but if that’s the case, then it could be an indicator of where José Mourinho is looking in order to provide Harry Kane and his attack with much needed backup.

The last report we covered regarding Spurs’ interest in Diallo suggested €15-20m would be needed for the 25-year-old, who scored 12 goals in 26 league appearances last season in Metz’s return season to Ligue 1.