If there’s one thing Tottenham and Leeds United have in common, other than wearing white shirts, it’s their need for a striker.

Spurs have been looking for a backup for Harry Kane ever since Fernando Llorente left and wasn’t replaced, while Marcelo Bielsa’s side relied heavily on Patrick Bamford with no real cover for him either.

That’s why, with a tough Premier League season looming, Leeds will be looking for another reliable man to partner or rotate with the ex-Chelsea starlet, which is where Habib Diallo comes in.

The Senegal international has been in fine form for FC Metz over the past couple of years, taking his impressive Ligue 2 form into Ligue 1 last year, scoring 12 goals in 26 league games, as well as assisting another three.

This caught the eyes of many scouts, with both Tottenham and Leeds linked sporadically over the course of the year, and it appears there may be something in it. 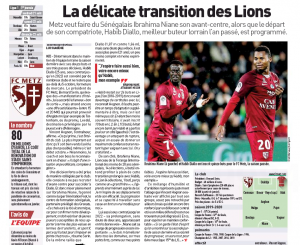 That’s because L’Equipe bring it back on Monday, explaining the 25-year-old has an ‘exit pass’ at the club, as long as they receive a ‘satisfying offer’, believed to be somewhere between €15-20m.

That hasn’t happened yet, but the French newspaper believe that could come from England (the player’s preferred destination) with Tottenham and newly-promoted Leeds specifically mentioned.

Either way, it’s made clear Diallo ‘will not stay’ beyond the end of the transfer window, which is October 5th.

Now it’s up to Spurs and Leeds to cough up the cash.