Real Madrid were dumped out of the Champions League on Saturday at the hands of Manchester City. Zinedine Zidane’s side have a brilliant record in the competition, but looked a long way from their best at the weekend.

Vinicius didn’t get off the bench for Madrid, despite their attack clearly lacking ideas. The Brazilian wasn’t even asked to warm up, and the situation has encouraged questions about his future.

Spanish newspaper AS report there’s been interest in the past from PSG and Arsenal, although the last time either club made an approach was over a year ago. Chelsea are named as the side who have made contact most recently, yet that was in November.

The Blues haven’t since returned, and Vinicius is calm about his future, feeling he’ll be given a fair chance under Zidane. With Chelsea not coming back to refresh their interest, and no other clubs showing up, there’s nothing for the player to consider at the moment. 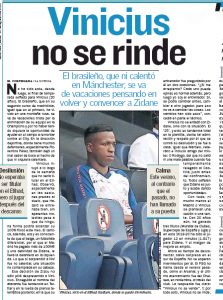 A big investment for Real Madrid, costing more than €40m when he moved from Flamengo, the 20 year old is seen as one for the future.

Should Chelsea or another club return, that stance may be challenged.