The Andre Gomes to Tottenham Hotspur rumours were never the most convincing.

Gomes, who had a very disappointing first season at Barcelona after his move from Valencia, has been at least half on the market all summer, and there hasn’t exactly been a queue of takers.

Then Jorge Mendes was instructed to find a destination for the player, which led to West Ham and and then Tottenham being linked. It may have been suspected the Hammers would be more susceptible to getting a Barcelona player on loan, with conditions, but it was Spurs who were then pushed to the front.

Friday’s edition of Marca says Tottenham, and West Ham for that matter, were in 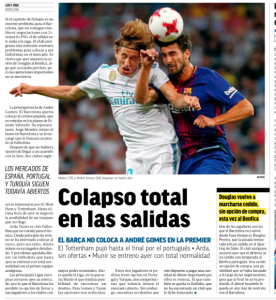 negotiations ‘until the last hour yesterday’ to try and get Gomes on some kind of deal.

Given it’s Marca, a Madrid leaning newspaper, the point of the article is Barcelona’s failure to ship out players, so they’ll happily believe an Andre Gomes transfer collapsed at the last minute.

The other Madrid leaning Spanish sport newspaper, AS, reported on Thursday evening that Tottenham were willing to accept Barcelona’s ‘play him less, pay more clause’ on a Gomes loan because Mauricio Pochettino was keen.