Tottenham’s move for Atalanta defender Cristian Romero is considered ‘more than possible’, and he may not be the only Serie A defender to arrive.

That’s according to Gazzetta Dello Sport, who provide an update on Romero and Takehiro Tomiyasu today.

On Romero, they explain that the defender has opened up the market to himself after a great season with Atalanta and a role in Argentina’s COPA America success.

Atalanta have already decided to pay the €20m they need to sign the Argentine from Juventus permanently, but his one-year stay at the club is unlikely to be extended.

He’s ‘too strong’ not to go away to one of Europe’s greats, say the newspaper, and Atalanta have put a €55m price tag on his head.

Tottenham are the ‘big favourite’ to secure his signature and have already ‘moved’ with the player and Atalanta, who they recently held negotiations with for Pierluigi Gollini.

This is backed up by Corriere dello Sport, who say Fabio Paratici is ‘waiting’ for Romero to arrive in London.

They say that there is already an ‘agreement in principle’ for him to make the move and Spurs ‘would be willing’ to pay €40m plus a maximum of €10m in bonuses.

Gazzetta have the same figure and say it is ‘more than possible’ that they will close a deal for Romero for around €40-45m with bonuses, a figure that would ‘open up’ the market for Atalanta to sign a replacement.

In fact, they want two defenders and have Tomiyasu and Juventus’ Merih Demiral on their list of options. 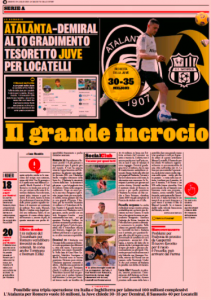 They ‘appreciate both of them’, but it’s a matter of figures, with Bologna asking for €22m plus bonuses for their man and Juventus going as high as €30-35m for Demiral as that’s what they were offered by Leicester last year.

The problem with Tomiyasu is that Tottenham are also interested and their last offer, which arrive ‘in the last few days’, was not ‘far from the goal’ that Bologna have set. In other words, they were close to the €22m the Italians are asking for.

The suggestion is that they could match that figure sooner rather than later and potentially pull off a double deal for him and Romero this summer.