Everton have ‘now joined’ the race for Lazio forward Joaquin Correa, with Arsenal and Tottenham also keen on the Argentine.

That’s according to Corriere Dello Sport, who say Lazio are happy to sell Correa this summer to bring in much-needed money for their own transfer business.

This ‘summit’ was planned to analyse the current situation at the club and evaluate what they are going to do in the transfer market.

The feeling at the club is that new players are needed, but in order to be able to do this, the club need a sale that can ‘unblock the liquidity index’ and guarantee them around €30m.

The ‘main suspect’ to bring that is Correa, who made it clear before leaving for the COPA America with Argentina that he wanted to find a new club.

Lazio are ‘moving to satisfy him’, and there are ‘many requests’ coming from the Premier League, where he has several suitors.

Arsenal and Tottenham’s interest is well known by this point, particularly the latter, as Fabio Paratici is believed to be a fan.

However, they are not the only ones, with it also claimed that ‘Everton have now joined’ the race for the forward. 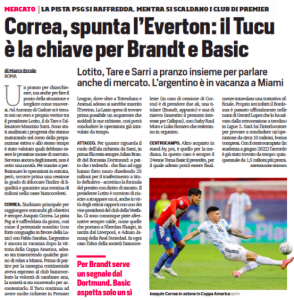 Whether any of the three Premier League teams can do so isn’t mentioned, nor is it stated whether any would want to pay the €30m asking price.

A move from Arsenal seems unlikely given they’ve just tied up Emile Smith Rowe, while Tottenham’s focus appears to be on other areas of the pitch.

Everton, meanwhile, have focused on very low cost moves so far this summer, and there have been several suggestions that they need to sell before they can buy anyway.

That would seemingly rule out all three for Correa at this moment in time, although perhaps a sale at Spurs or Everton could change their stances.