Heavily linked with Tanguy Ndombélé in these early days of the transfer window, Tottenham have made it clear they are on the lookout for extra men in midfield.

With the Lyon starlet is expected to leave the Ligue 1 side before the end of the month, the French side will have to eventually replace him.

Among the names the French side are looking at, according to L’Equipe, is Toulouse’s Ibrahim Sangaré, who has caught the eye of a number of Premier League clubs, including Everton, after racking up 53 league appearances at the tender age of 21.

Capable of playing in front of the defence or stretch his legs in a more box to box role, the Ivory Coast international could be one of the names the Toffees have on their list in case of an Idrissa Gueye departure, but they will face competition.

Outside of Lyon, Southampton and Arsenal are also said to have scouted him, as have… Tottenham. 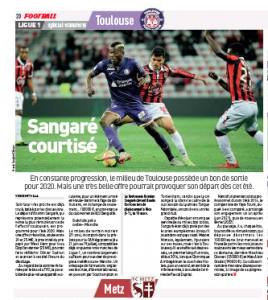 As L’Equipe point out, the player is often compared to Yaya Touré, and we all know the success story the former Manchester City midfielder was in England’s top-tier during his best years.

The French newspaper explain the young starlet has been given the green light to leave, but only in 2020.

However, the real truth is that an offer close to what Toulouse received for Issa Diop last year (around €25m) could change their mind.

There’s no indication that either Everton or Tottenham will make a move for the defensive midfielder, but if the Toffees receive €30m+ for Gueye over the next couple of months and agree to sell him, then Sangaré could be a quick and relatively cheap fix to sort out.