Home Europe Tottenham ‘clearly open’ to transfer, but details of it may surprise Daniel...
SHARE

French newspaper L’Equipe and French magazine France Football have both published Friday articles on Moussa Sissoko and his complicated Tottenham exit, but they contradict each other.

L’Equipe claim Everton have made an approach for the midfielder, and only want to sign him on loan. Sissoko almost moved to Goodison Park during the last summer transfer window, but snubbed Everton at the last minute for Tottenham, so it may be considered a surprise if Ronald Koeman returns.

The French newspaper said Daniel Levy is against a loan, which could frustrate Everton’s plans.

However, France Football believe Tottenham are ‘clearly open to a loan with an option to 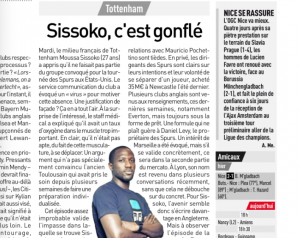 buy’, and they also disagree with L’Equipe on Marseille interest.

Whilst the newspaper explained there’s nothing concrete in Marseille interest yet, France Football talk it up. In fact the only problem seen is that Sissoko would prefer to stay in the Premier League, which would benefit Everton.

There’s clearly a lot of confusion on the terms Daniel Levy will agree to, but one thing seems certain… Tottenham would like Sissoko to leave.