Home Europe Pau Lopez says he’s happy to be at “club of my life”...
SHARE

Even now there’s the feeling Pau Lopez will end up at Tottenham Hotspur, and that Espanyol and the Premier League club will eventually come to some sort of agreement.

Mauricio Pochettino and his coaches want Pau, the goalkeeper was at Spurs for a year on loan, and it’s only a failure to agree the fee which means the 22 year old isn’t a permanent Tottenham player.

The London club thought the €7m clause to make Pau’s loan permanent was too high, and whilst they may have had a point, Espanyol will feel they had a better one in refusing less than €2m.

In Spain the deal has been reported as almost closed repeatedly, but each time the clubs 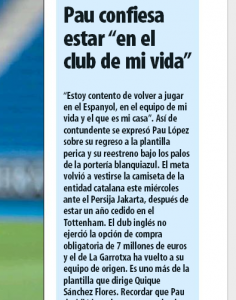 simply haven’t been able to get things over the line. That’s left Pau back at Espanyol, and he’s getting on with things at the club where he came through the ranks.

Mundo Deportivo quote the former Tottenham loanee as saying: “I am happy to play again at Espanyol, it’s the club of my life and the one that is my home.”

Despite Pau being content, it’s probably best not to rule out this transfer flaring up again in August.