As Marcus Edwards continues to succeed for Vitória Guimarães, there’s been chatter about a return to England, and reports from Portugal talk a lot about this possibility.

This isn’t the first time we’ve covered a story from the Portuguese media about this, but newspaper O Jogo brings something new this time.

They say that even though Manchester United have been linked to the former Tottenham player, they’ve learned that he’s actually not in the Red Devils’ plans for the summer.

Still, O Jogo writes that Edwards has been followed by ‘several English sides’, although none of them are named in the story. 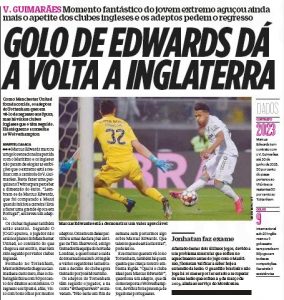 The newspaper mostly brings comments from Tottenham Hotspur fans on social media asking Edwards to return to the club. They also highlight a tweet suggesting him to Wolverhampton Wanderers.

When letting Edwards go to Vitória on a free move last summer, Spurs kept 50% of a future transfer.

That means they could either get a discount when signing him back or make a good profit in case another English side buys him.