Jose Mourinho taking over at Tottenham Hotspur has given the Portuguese media an opportunity to go crazy again on a Bruno Fernandes transfer.

Friday’s edition of A Bola has Jose Mourinho and the Sporting midfielder splashed across the front page, with it stating ‘Mourinho opens the door for Bruno’.

Inside it’s reported the player’s signing ‘gains strength’ at Tottenham, and an attempt for the player ‘could happen as early as January’.

Mourinho is said to ‘greatly appreciate’ the midfielder, and it’s stated Spurs were the only club to make a concrete attempt during the summer. Therefore, the ‘perfect storm’ is now in place at the London club.

Towards the end of the summer window, Jorge Mendes was called in to assist Miguel Pinho, Bruno’s agent, with building a deal. It was all too late, yet Mendes and Mourinho are as close as an agent and manager can be, so that adds to the scenario and excitement for the Portuguese media.

Sporting are said to want €70m, yet A Bola said they’d probably accept €60m due to the club’s difficult financial situation. Tottenham had offered a €65m package in the summer, however, €20m of that was dependent on the club winning the Premier League and 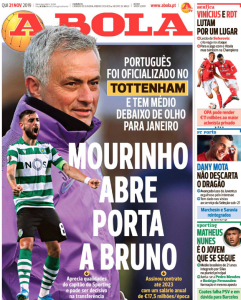 It’s known Tottenham made that offer, Sporting’s president has spoken about it publicly. Spurs either moved because Mauricio Pochettino wanted the player, or because Daniel Levy decided he could be an alternative to Giovani Lo Celso, and which of those scenarios was true, and what happens to the, technically still owned by Real Betis, Argentine could be key.

So far, this is all based on circumstantial evidence.

Bruno Fernandes | For the love of god, won’t someone just buy him.

A look at the summer saga, the player, and how Bruno really can’t do much more. https://t.co/z63pZNX3RQ #thfc #coys #mufc pic.twitter.com/RrRY1gobXF