Home Europe “I want to train and play” – Moise Kean speaks out about...
SHARE

It can’t be easy being the centre of a lot of attention from a whole nation’s sports section at the age of 19, but, somehow, Moise Kean is powering through it.

Following his fine at Everton for turning up late to a team meeting, the forward has seen rumour after rumour being written about his future, as well as his father voicing his opinion, which didn’t go down well with the player.

Thankfully for Kean, there was an international break to keep him distracted, and he used it to great effect, finding the back of the net twice against Armenia’s U21s on Monday night.

Set to return to Goodison Park for the festive period ahead of the January window, the player spoke to Corriere dello Sport for their Thursday edition and gave a small insight as to what was going through his mind these days.

He said: “I’m not thinking about the transfer window now, others are doing that. I’m looking at the present, I want to train and play.

“The Premier League is a very different league to Serie A. You need time to adapt. If I have to think about an immediate goal, it’s only to earn a starting spot at Everton and work towards that.” 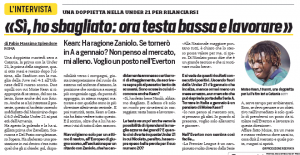 The player also took the time to apologise and admit he was ‘mistaken’ for breaking the rules set by then Italy U21 manager Luigi Di Biagio back in June.

Nothing in his quotes screams ‘I want to leave!’, but he does seem very aware of all the stories being written about him these days.

Everton haven’t suggested they would be willing to let the player go anytime soon, and so it really is a matter of waiting and seeing what happens in the next month or so.

If Kean’s situation under Marco Silva doesn’t improve, perhaps that January loan would be best for all involved, but for now, he isn’t thinking about that.