There’s been a development according to Sport, and they state Spurs are ‘already negotiating’ for his signing.

The midfielder is determined to change clubs and doesn’t want to return to the La Liga side for preseason.

Pjanić is in regular contact with his entourage and the Catalan club, as the 31-year-old ‘wants to resolve his situation this week’. Therefore, his agent is ‘working against the clock’ to find a new destination.

It’s claimed the negotiations for his exit are progressing well as there are several clubs interested in him, including Nuno Espírito Santo’s side, and ‘everything indicates’ he will go out on loan this summer.

The Bosnian’s preference is to return to Juventus, and it’s been communicated to his agent and Barca. The Serie A side must first offload a few midfielders before making an approach for Pjanić, and this has seen the latter’s agent look for other options. 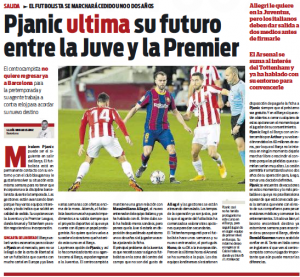 This is where Tottenham fits in as they had asked about the player a few weeks ago. Sport state the former Wolves manager has given his approval to sign Pjanić.

Spurs would be in favour of taking care of the former AS Roma man’s wages, ‘as long as the loan is free’.

Ronald Koeman’s side are open to the idea of closing his transfer using any options since they want to lower their wage bill.