Tottenham Hotspur are ‘willing to take the first step’ to sign Barcelona’s Miralem Pjanić, according to Mundo Deportivo.

Barca wanted to let the 31-year-old leave as a free agent, as he’s not in Ronald Koeman’s plans, but Pjanić has rejected it.

The midfielder struggled last season and even though he has three more years left on his contract, his days at the Camp Nou are numbered.

Spurs chief Fabio Paratici knows the Bosnia and Herzegovina first hand from his time at Juventus, and this would help Tottenham to sign him.

The former AS Roma man’s priority is to return to the Turin club, mainly because he shares a special relationship with their manager, Massimiliano Allegri.

However, Juve have not taken steps to sign Pjanić as their priority is to bring Sassuolo’s Manuel Locatelli to the club. 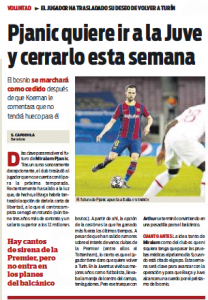 This has allowed other teams to move for the Bosnian, including the north London club.

Another Catalan newspaper Sport also states the player’s preference is to rejoin Juve, despite attracting interest from Tottenham and others.

The report explains that ‘key days’ are ahead to solve Pjanić’s future, and the player, for his part, may not even be required for medical tests on July 9th, so wouldn’t start preseason with Barcelona.