Saturday saw claims from the Catalan media that Barcelona are open to selling Ilaix Moriba to Tottenham Hotspur and that the two clubs were negotiating cordially.

Sunday’s edition of Mundo Deportivo reports talks between the pair are ‘well advanced’, and it would see the midfielder move for an initial payment of €15m. On top of that would be further bonus possibilities, and the transfer could eventually reach a value close to  €20m.

It’s the variables that the clubs are still discussing, although that’s not presented as being a problem.

Now it’s time for Tottenham to convince Moriba, and Mundo Deportivo add the harder issue could be convincing the player’s entourage. 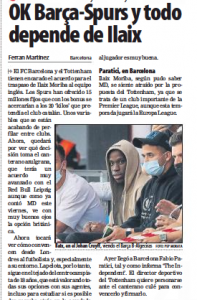 Those representing the youngster have already reached an agreement with RB Leipzig, for a potential free transfer next year, and it’s thought it’ll take some convincing to get them to change track.

Moriba himself is thought to be tempted by a move to Tottenham. Spurs, however, will not ‘go crazy’ when it comes to offering commissions to those involved.